There are a lot of big things on this little phone – the Asus Zenfone 9 is actually a bit smaller than the Zenfone 8, but it brings a larger camera sensor, larger battery, large VC for the chipset and so on.

The 9-series phone measures 146.6 x 68.2 x 9.5mm and weighs 165g, make it one of the smallest Android flagships. It’s not a mini, but it does pack quite a punch. It is powered by the new Snapdragon 8+ Gen 1 chipset and Asus replaced the heat pipe of the Zenfone 8 with a large vapor chamber to keep it cool. 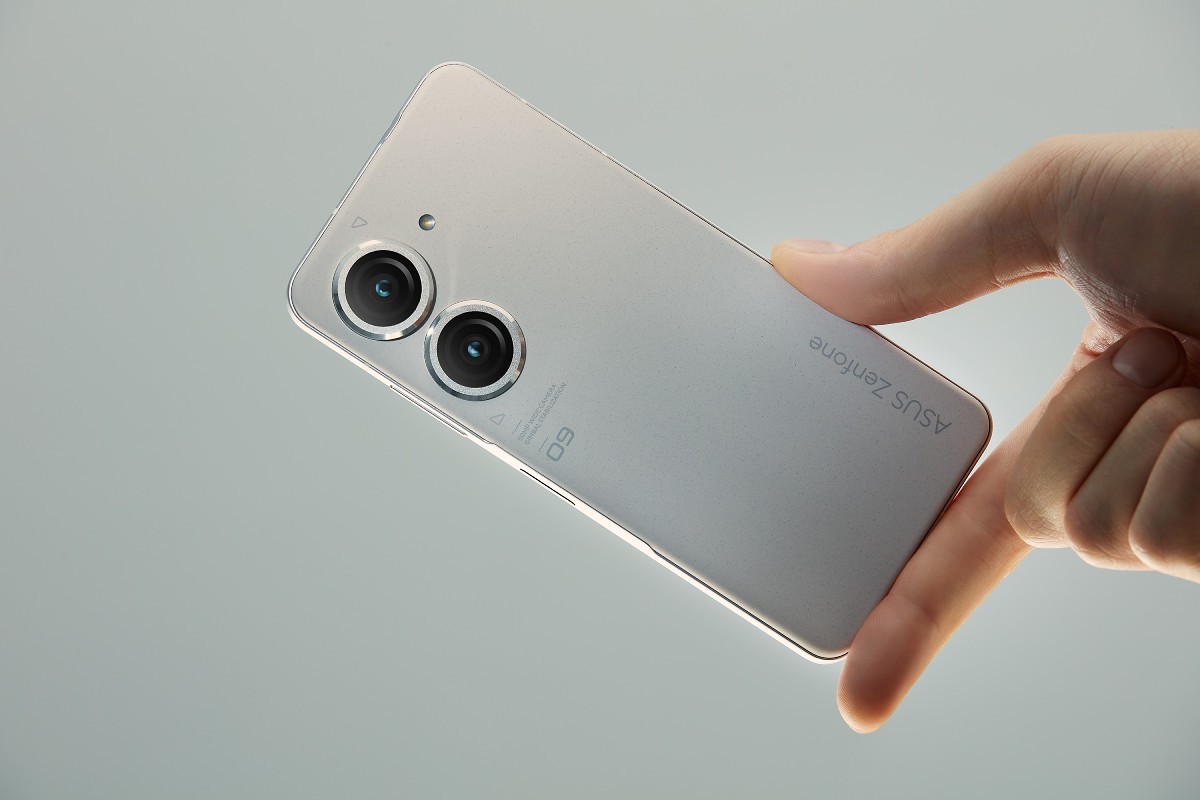 There are three memory configurations: 8/128GB, 8/256G2B and 16/256GB (LPDDR5 RAM and UFS 3.1 storage). There is no microSD card slot (there wasn’t one last year either). The phone launches with near stock Android 12 and will receive 2 major OS updates and at least 2 years of security patches. 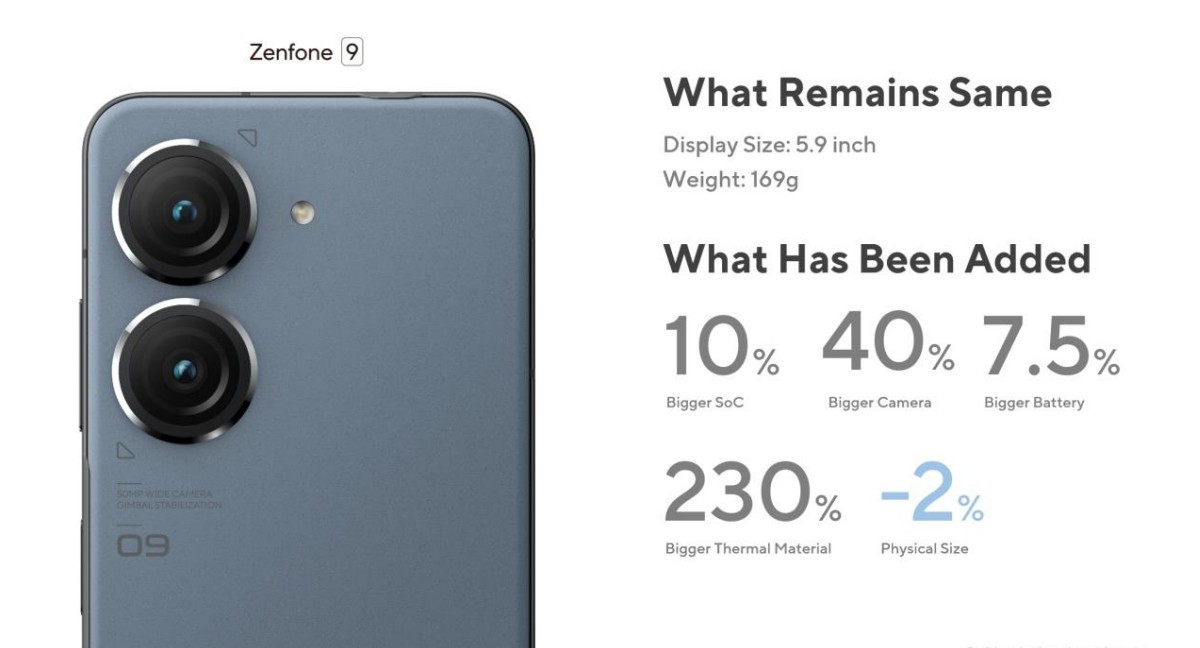 Going back to the body for a bit, the mid-frame is made out of aluminum. The back is made out of a polymer material that is harder to scratch than plastic and more shatter resistant than glass. The phone is rated IP68 for dust and water resistance, the front is guarded by Gorilla Glass Victus. 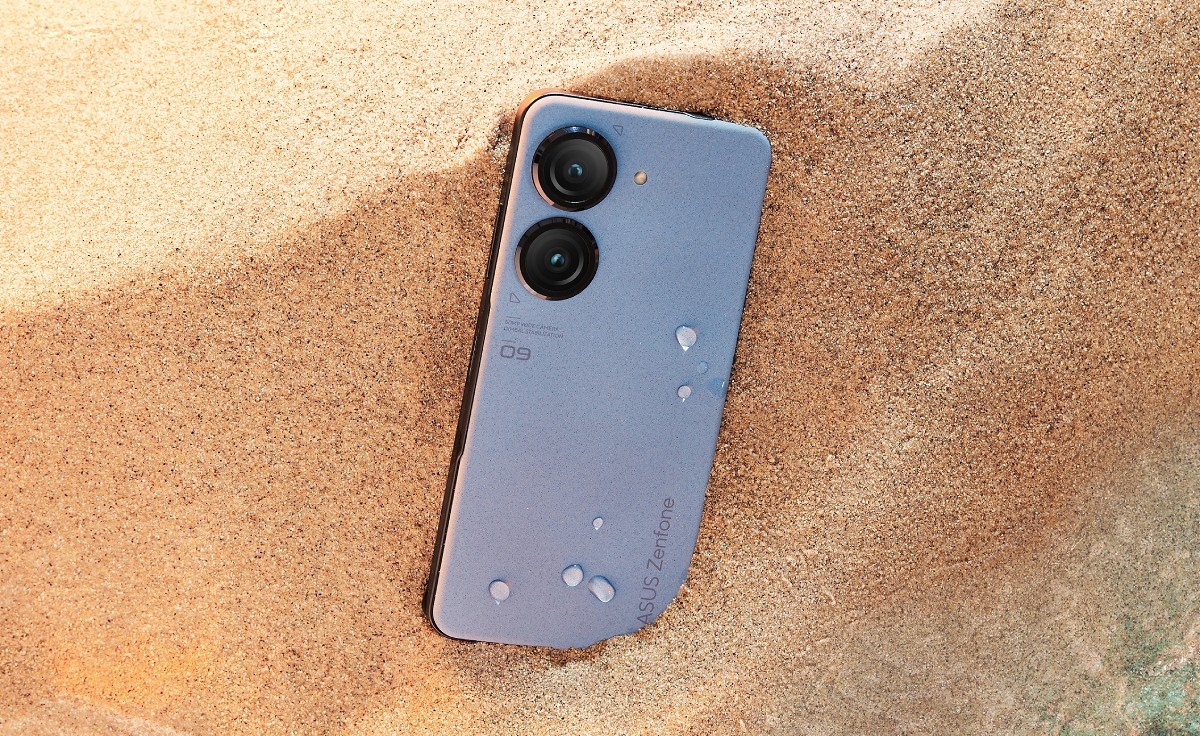 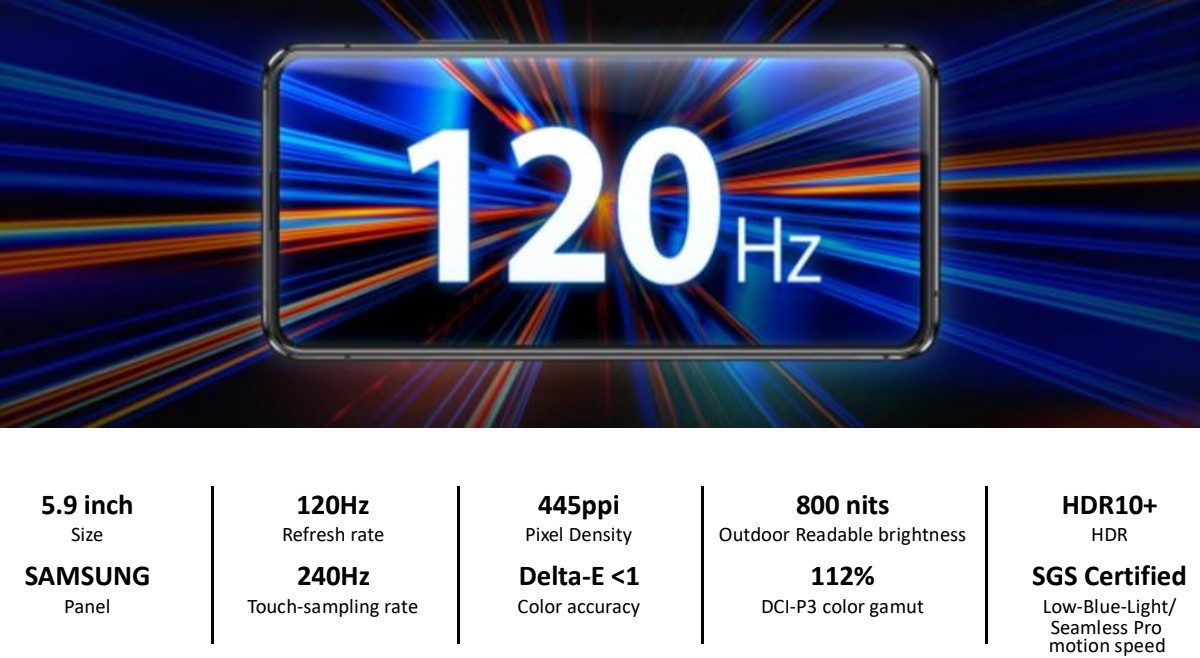 The Zenfone 9 uses three Sony sensors for its cameras. The main module on the back is equipped with the 50MP IMX766 (1/1.56”, 1.0µm pixels). This module has a 6-axis hybrid gimbal stabilizer that is three times as effective as regular OIS. There is no telephoto lens on this phone, but the IMX766 can do 2x lossless zoom (at 16MP resolution).

Asus takes audio seriously so it combined Qualcomm hardware with Dirac tuning. There are two speakers on board. The bottom one has a 7-magnet design (12x16mm), the top one is a 3-magnet speaker (10x12mm). Each has a Qualcomm Aqstic amp (WSA8835). There is a 3.5mm headphone jack on board, but if you prefer to go wireless, aptX HD and Adaptive are supported, as well as LDAC and AAC. You have access to four audio styles by Dirac and a 10-band equalizer. Bespoke configuration data is available for most Asus headphones so that you can get the best audio out of the phone and headphones.

As promised, the battery is quite large, at 4,300mAh it has 300mAh more in its tank than the Zenfone 8 battery (also, the similarly-sized Galaxy S22 has a 3,700mAh battery). This gives you the freedom to not use all of it – you can set the maximum charge at 90% or 80%. The latter will reduce battery degradation, only 7% after 500 cycles instead of 15% if you charge it to full. There’s more you can do for the battery. The phone comes with a 30W HyperCharger (it supports USB Power Delivery 3.0 PPS), but you can toggle Steady and Ultra Steady modes, which limit the charge power to 18W and 10W, respectively. This lowers temperatures and further stretches out the battery longevity. Asus promises nearly 2 days of battery life and this is with a lot of phone calls (90 min), hundreds of text messages, streaming music for over an hour, watching YouTube and TikTok videos, gaming for an hour, snapping some photos and recording videos each day.

The Zenfone 9 moves the fingerprint reader from under the display to the side of the phone. This allows it to act as a smart button. For example, you can scroll to the top or bottom by swiping up or down. You can also set custom actions for a double press or a long press.

The phone takes a page out of the ROG playbook with Game Genie. It lets you block notifications, but it also lets you have any app floating over the game if you need to respond or check something. The Genie can show game FPS, estimated battery life remaining, system temperatures and more. It can also purge background apps from RAM if needed. It has a built-in screen recorder to capture your gameplay and it can help you too with a macro function that can automate a complex sequence of touch actions. If you’re really stuck, you can also do an Internet search or browse YouTube for a guide, all without leaving the game.

Asus has put together an above average retail package. You get the 30W HyperCharge adapter and cable, plus a bumper case. The package is made out of recycled paper with soy ink and uses a non-adhesive design. 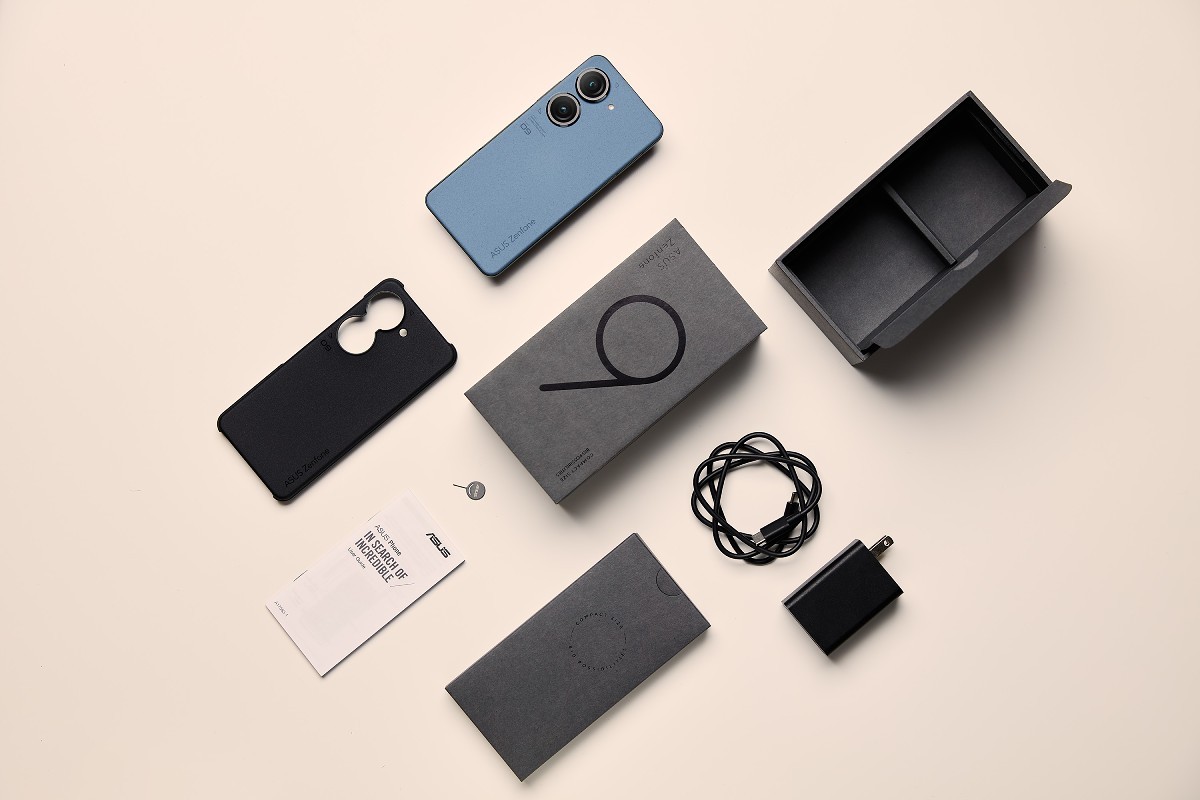 Alright, how much? The Asus Zenfone 8 will start at €800 for the 8/128GB model (exact pricing depends on local VAT). It will be available in Europe, Hong Kong and Taiwan first, then it is headed to North America, Japan, Indonesia and parts of South America.

There is no Flip model, at least not yet – if you want something bigger, there is always the ROG Phone 6.

Before we wrap up, Asus also unveiled a series of cases dubbed the Connex accessories set. These allow accessories to be attached to them, e.g. a kick stand that is programmed to automatically launch YouTube when it is opened (you can change to a different app from the settings). There is also the Connex Card Holder, which holds business cards. 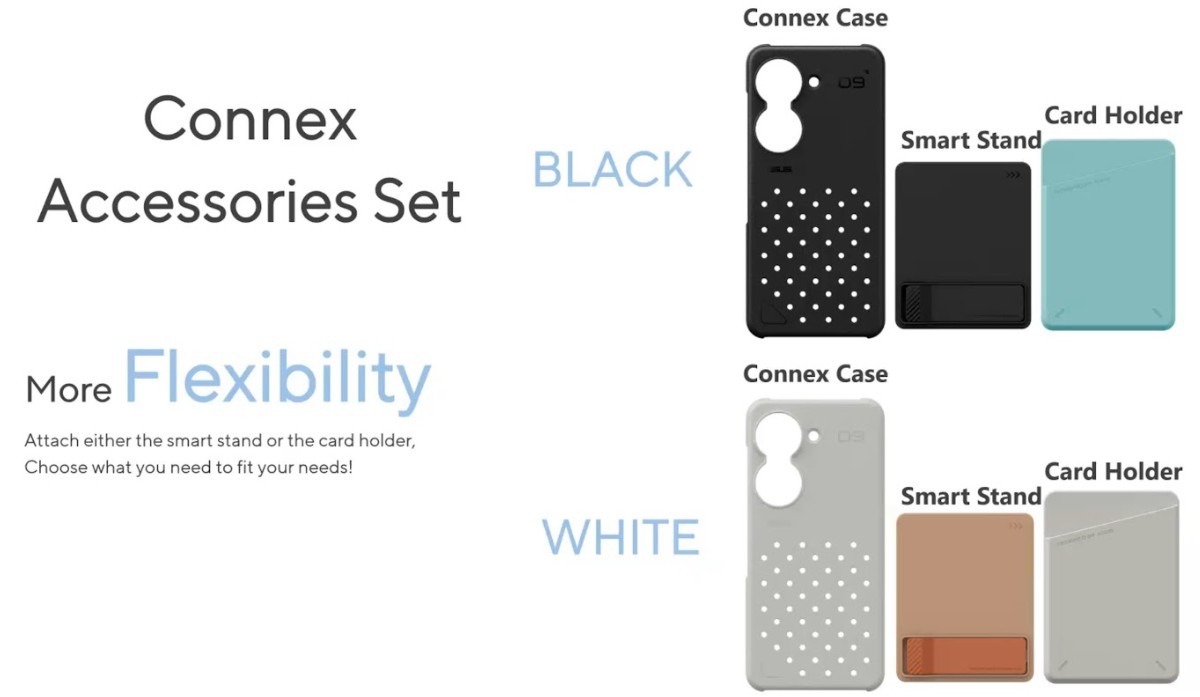 There is also the Smart Backpack Mount. This attaches to the shoulder strap of your backpack and keeps the phone steady (thanks to a magnetic base) so that you can use it as an action cam. If you need to check the map or something, the phone is on a retractable lanyard, so you can pull it, use it and let it move back to your shoulder.