Samsung is rolling out a small update for the Galaxy S6, S6 edge and S6 edge+


Samsung has fixed a GPS issue on several old Galaxy S models and has been delivering updates to them. And when we say “old”, we mean it – last month it was the Galaxy S8 from 2017 and the S7 from the year before. Now there is an update for an ever older series, the Galaxy S6 family from 2015.

This should slowly expand to cover all S6 versions, carrier ones and unlocked, plus ones in other countries. If you don’t see a notification, you can check for updates manually. If you still don’t see it, you will have to arm yourself with patience. 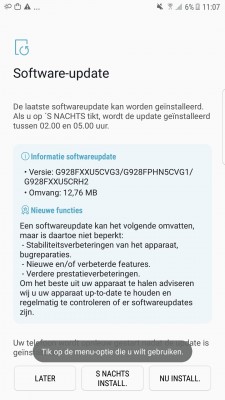 The Samsung Galaxy S6 series is getting a small update

The update doesn’t mention a GPS fix like it did with the Galaxy S8, though it is probably what this is. The change log only talks of stability improvements and bug fixes, “new and/or improved features” and “further performance improvements”.

It is also a much smaller update, weighing in at under 13MB, compared to 420MB update of the S8. It goes without saying that this doesn’t include a new Android version, not even a new security patch. Still, any update is a surprise given that the launched 7 and a half years ago.

The Samsung Galaxy A40 is much more recent, having hit the streets in 2019, but it’s already nearing the end of its 4 year period of guaranteed security patches. The A40 was running the July patch and is now moving up to the September one with a 280MB update (A405FNXXS4CVH1).

The Samsung Galaxy A40 is also receiving an update

The gap is expected as the phone is currently on a quarterly update schedule. However, when it turns 4 in March 2019 it may drop down to the biannual schedule (which is home to some A-series models from 2018, but also some contemporary models like the Galaxy A30, A60, A70, A80 and A90 5G).

vivo shows off images of X Fold+ in red