A large number of Oppo phones will be updated to ColorOS 13 this month. This includes phones that will get the stable version as well as phones whose firmware still needs a bit of work (those will get the beta version instead). Again, this is the list just for the month of December. 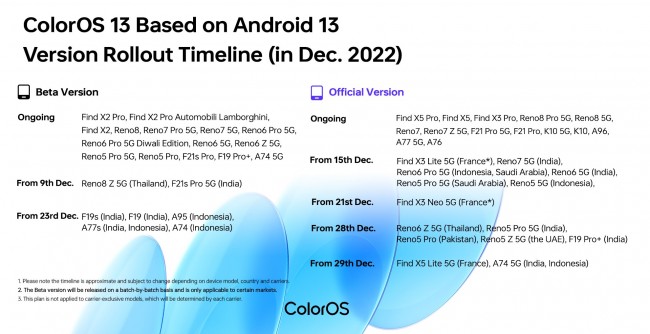 Oppo warns that the timeline is approximate and there may be unforeseen delays for specific models in some countries for certain carriers. Also, the update schedule for carrier-exclusive models depends on the carriers themselves.

With that in mind, here is the timeline. Recent high-end models will go up to ColorOS 13 over the next couple of week, then attention will turn to older and lower-end models. Note that some updates cover all territories, while others will arrive on a country by country basis.

There are quite a few phones that will undergo beta testing this month before the stable release is ready. Here is the list. There is some overlap with the list above as the firmware for some regional variants isn’t ready for prime time. Note: the rollout for the beta software will be done on a batch-by-batch basis.

If you want to learn more about Oppo’s ColorOS 13 modification of Android 13, check out our hands-on review. Also, there are quite a few Oppo phones (and tablet) that remain on the waiting list, their update is coming in the first half of 2023 (more details on the official page).