A Massive Modular Smartwatch To Match Your Sci-Fi Fantasies 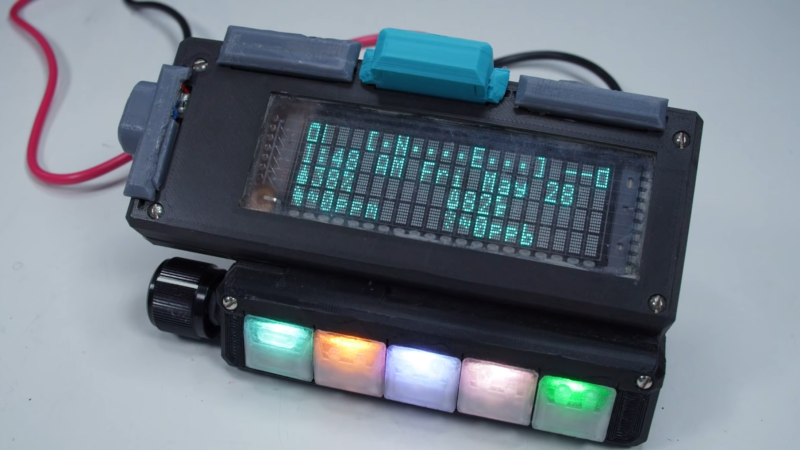 Modern smart watches have some incredible features, but they still don’t stack up to what science fiction promised us, both in size and capabilities. Fortunately, [Zack Freedman] has set out …read more

Modern smart watches have some incredible features, but they still don’t stack up to what science fiction promised us, both in size and capabilities. Fortunately, [Zack Freedman] has set out to change that with the Singularitron, a modular wearable computer that is less Apple Watch and more Pip-Boy.
The most striking features of this monstrosity is its size and the out-of-production four-line VFD display. The inputs consist of a row of large RGB-illuminated buttons and a rotary encoder mounted at an angle to curve around the wearers arm. On the inside are a pair of PCBs with an integrated Teensy 3.2, BLE module, motion processing module, haptic driver and power circuitry drawing from a removable 18650 battery. The armband is from a commercial wrist mounted barcode scanner which attaches to the Singularitron with a quick-detach mount.
A major feature of the Singularitron is its modularity. Arrayed around its edges are four slots with spring-loaded contacts for add-on modules. Modules have access to the SPI and I2C busses, two GPIO pins, 3.3 V and 5 V lines. Each module also contains an EEPROM chip to store the module’s ID and any configured settings, allowing modules to be hot swapped and automatically recognised. [Zack] has created a number of modules, like a laser pointer, environmental sensor, OLED display and a Teensy 4.0 to blink an LED. When a module is plugged or inserted, a series of randomly generated status messages flash across the display, thanks to an awesome little library which we are absolutely copying for our own projects. Ironically, keeping the time is one of the Singularitron weak points, since [Zack] wasn’t able to fit a backup battery inside, so the time needs to be reset when the battery dies. Maybe a module with an RTC and backup battery is the perfect solution.
The Singularitron is the upgraded version [Zack]’s original SmarTwatCh, which had the same chunky aesthetic. His other projects are a regular feature here on Hackaday, and include everything from Nerf sniper rifles to head mounted eye-trackers.

Ok, we’ll come clean. [Design Build Destroy] didn’t really add any memory to his Arduino Nano. But he did get about 1.5K more program space when compared to the stock …read more

A Roomba robot vacuum will change your life, and Prime Day is the time to get buy one

Pakistan reports over 3,700 infections over past 24 hours

Today only: save up to 33% on Anker charging accessories at Amazon

Centre has a liking for Punjab, KP CMs because they ‘remain silent’: Murtaza Wahab